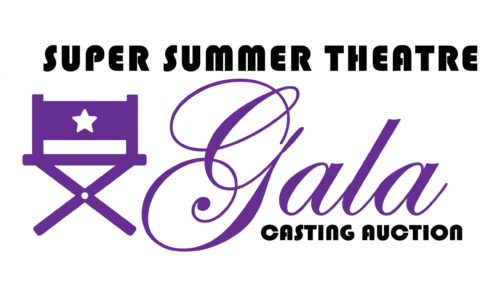 Drinks and Hors d’oeuvres at 5:30pm

Join us for a night of fun, previews and a chance to bid on being on the large Super Summer Stage in The Addam’s Family!

his wife, takes great pride in his children, and is immensely proud to be an Addams; caught

between his daughter and his wife he feels completely trapped and unable to make either happy, which is his greatest joy; must have great comedic timing, move well, and strong vocals. Fencing skills a plus. Opening bid = $500

family and the critical and moving force behind it; easy comedic actress with a sexy, dry wit; feels her husband is hiding something from her and will use any tactic to lure the secret out; a strong dancer. Opening bid = $500

husky boy who loves being tortured by his sister; he wants to ensure he won’t lose his sister to her new boyfriend so he takes matters into his own hands; strong, high vocals. Voice not yet changed. 5’ max height requirement. Opening bid = $500

very few words, often spoken at half speed; most of what he utters is long, plaintive groans, some tinged with irony or exasperation; must have true low bass vocals. Opening bid = $250

husband to his rhyming wife, Alice; thinks the Addams’ are beyond strange and does not want to spend time having dinner with them, much less be related. Opening bid = $250

mousy housewife who’s devoted to her family so she puts aside her own desires; while at the

Addams’ family dinner party, she drinks a potion that causes her to let her hair down and speak

love with Wednesday Addams and plans to marry her; experiences the youthful pain and drama

of young love and struggles with the differences between his family and the Addams family.Opening bid = $250

The Ancestors, SATB, 12+: Strong contemporary singer/dancers who sing and have a

fun, quirky sensibility. Knowledge of tango and flamenco dancing a plus. Must be able to hold

Strong pop voice with belt (A3 – E5), 18-25 to play 18: Gothic in a sexyway, witty with a terrifically dry sense of humor; just wants her family to be “normal” for one night to meet the parents of the boy she’s fallen in love with; strong pop belt vocals. Preferably seeking actresses 5’4 & under for this role. Prefer 18 – 25 year olds. Strong 17 year old singers will be considered.

This will be a sponsored role with a separate audition.

Please prepare 16 to 32 bars of a song in the style of Addams Family The Musical as well as a 1 minute read, something of your choice, to be done in the style of Wednesday Addams.

THE ADDAMS FAMILY, a comical feast that embraces the wackiness in every family, features an original story and it’s every father’s nightmare: Wednesday Addams, the ultimate princess of darkness, has grown up and fallen in love with a sweet, smart young man from a respectable family– a man her parents have never met. And if that wasn’t upsetting enough, Wednesday confides in her father and begs him not to tell her mother. Now, Gomez Addams must do something he’s never done before– keep a secret from his beloved wife, Morticia. Everything will change for the whole family on the fateful night they host a dinner for Wednesday’s “normal” boyfriend and his parents.